Jadene Mayla is a multimedia artist with an MFA in Applied Craft + Design from both Oregon College of Art and Craft and Pacific Northwest College of Art, a BLA in Landscape Architecture, a certificate in BioGeometry Foundations from the Vesica Institute for Holistic Studies, and a professional certification in Permaculture Design from Cascadia Permaculture Institute.

Visitors walk right up to her “harmonic artworks” and literally try to crawl into them.  Some stand inside the net-like sculptures, while others walk between them and the white gallery wall.  Smart phone flashlights create intricate three dimensional shadows in the color of what the artist calls “vibrational instruments.”

People of all backgrounds and ages are drawn to these sea creature- or plant-like sculptures.  The artist explains that this engagement with the work allows its energetic properties to affect people.

This interaction accounts for a mildly disorienting sensation felt by sensitive viewers.

Jadene Mayla hails from the Bay Area, lived in Oregon from 1983 to 2017, and relocated to the Los Angeles area in 2018.  Her artwork focuses on the application of 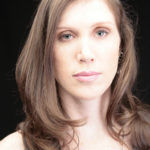 the science of BioGeometry, a discipline resuscitated from Ancient Egypt by architect and engineer Dr. Ibrahim Karim.

She knits her beautiful pieces from hemp or linen yarn, then stretches and stiffens them in forms she thinks her audience will recognize.  Seaweed and plant seed pods most closely resemble the microscopic sacred geometry she employs to make them, she explains.  She did a Google search on a hunch and discovered her knitting pattern looks identical to magnified plant cells.

She chooses complimentary colors that mimic the pulse of living things.  The curving lines of each piece create a striking combination of line, shape, and negative space, and the sculptures hang and rotate on currents of air, offering what seems like an endless number of perspectives.

“These are some kind of decadent fixture.” – owner

“People have remarked that they can feel the energy.” – curator

BioGeometry is a sacred science that allows me to verify and design for the emanation of a specific trio of subtle frequencies shown empirically to protect biological systems against electromagnetic fields.  Through its application, I also capture the attention of elemental forces the ancient Egyptians called NeTeRs.  It is my intention to co-create an object-scale architecture of human awakening through my engagement with these natural Devic intelligences.

In my sculptures, you see my Casting of the Net.  I allow the pattern of the nets to precisely resemble the cellular structure of plants while molding the knit pieces into forms that evoke living organisms and the pulse of vital energy. These works have been successful in drawing the engagement of a diverse audience, which meets my goal of bringing people into their resonant field.
Purchase art or submit custom orders at www.harmonicartworks.com